A visual and dramatic tale riddled with scientific and political inaccuracies

Gasland has been widely praised by critics for its dramatic storytelling and extraordinary visuals—it’s lauded as “one of the most effective and expressive environmental films in recent years.” Environmentalists credit the film with bolstering the anti-fracking movement, encouraging politicians and voters to ban drilling in various states and localities. Yet if you’re looking for a science-based, balanced look at hydraulic fracturing (aka fracking), you’re looking in the wrong place.

By combining personal stories of individuals impacted by drilling with scary statistics about the increase in hydraulic fracturing—a process that has been done safely in the U.S. for more than half a century—filmmaker  Josh Fox sought to put a human face on America’s natural gas expansion. While the story is powerful, a closer examination of the facts reveal that many of the claims made by the movie’s participants aren’t actually supported by science.

The faucet scene was filmed in an area where methane was naturally present in drinking water long before the drilling began.

Perhaps the most memorable scene in the documentary depicts a Colorado resident holding a lighter under his faucet, only to have the water violently ignite. This myth that hydraulic fracturing can cause drinking water to become highly flammable has been repeated over and over again by anti-fracking activists who point to the documentary as “evidence.” But there are some key facts Fox left out of this vignette.

The scene was filmed in southern Weld County, Colorado, an area where methane was naturally present in drinking water long before the natural gas industry began drilling. A 1983 report from the American Association of Petroleum Geologists found that “Methane-rich gas commonly occurs in ground water in the Denver basin, southern Weld County, Colorado. The gas generally is in solution in ground water of the aquifer.” The Colorado Department of Natural Resources even told the film’s subject, “There are no indications of any oil & gas contamination to your well.”  Fox apparently knew these facts about the flammable drinking water, but chose not into include them in the film because “they were not relevant.”

The film seeks to portray hydraulic fracturing as a largely unregulated process, interviewing various politicians and activists about the idea that when the Energy Policy Act of 2005 passed Congress, it exempted fracking from key environmental regulations after heavy lobbying from the energy industry. Yet, the hydraulic fracturing process is actually heavily regulated under federal law—the industry is subject to the Clean Water Act, rules set by the Occupational Safety and Health Administration, the Safe Drinking Water Act, and the Community “Right to Know” Act. And in addition to federal requirements, states that allow fracking have their own agencies set up to monitor the industry and their own regulations in place to ensure drilling safety.

The documentary culminates with a visit to a Congressional hearing on the FRAC Act, a bill that would supposedly remedy Congress’ 2005 legislation and “simply takes out the exemption for hydraulic fracturing to the Safe Drinking Water Act.” But whether the legislation actually improves oversight and regulation of the industry is highly debated; increasing federal monitoring of the hydraulic fracturing process could “shift responsibility away from local authorities better equipped to handle local situations.”

Fox tries to give viewers the impression that fracking involves injecting water infused with hundreds of dangerous chemicals into the ground that could seep into groundwater. Early on in the documentary, he claims that fracking “blasts a mix of water and chemicals 8,000 feet into the ground” and “In order to frack, you need some fracking fluid – a mix of over 596 chemicals.”

What isn’t fully explained is that 99.5 percent of the fluids used in most fracturing processes is comprised of water and sand. The claim that there are over 596 chemicals in fracking fluid has also been widely debunked; in most cases, only a dozen chemicals make up the remaining one half of one percent of the total fracking fluid volume. While some of these chemicals have been linked to cancer or other health problems, they’re used in incredibly small amounts and do not come into contact with drinking water. Others are so innocuous they’re even used in ice cream.

The U.S. Environmental Protection Agency in 2004 concluded, “EPA also reviewed incidents of drinking water well contamination believed to be associated with hydraulic fracturing and found no confirmed cases that are linked to fracturing fluid injection into CBM wells or subsequent underground movement of fracturing fluids.” The agency’s former head Lisa Jackson said in 2011: “I’m not aware of any proven case where the fracking process itself has affected water although there are investigations ongoing.” This is from the EPA — not a source likely to defend the oil and gas industry.

Many of the health problems the film’s participant attribute to fracking don’t hold up to further scientific examination. The film interviewed the mayor of Dish, Texas who blamed the natural gas industry for increased benzene (a carcinogen) in the blood of town residents. Yet, state health officials studied the issue and found, “For the majority of the participants, the levels of [volatile organic compounds] measured in blood were similar to those measured in the general U.S. population, suggesting that their exposures to these contaminants were not different than those received by people living in other areas of the U.S.”

HBO’s synopsis of Gasland states that “[the] public remains largely unaware of the potential dangers of hydraulic fracturing.” While all forms of energy development come with risks, the documentary’s exaggerated depiction of hydraulic fracturing has given the public a skewed sense of the actual risks posed by increased natural gas development. Ultimately, Fox’s misleading film succeeds in creating a powerful piece of drama to bolster anti-fracking activists across the U.S. 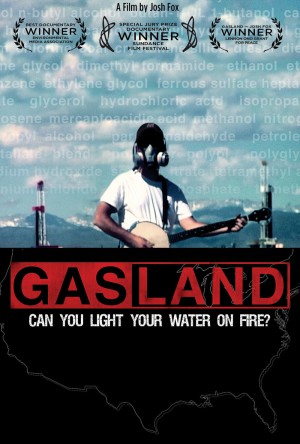